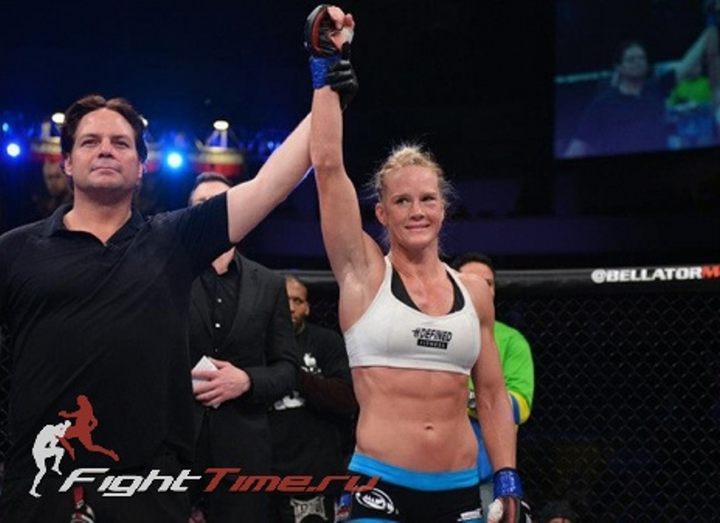 The former world champion in boxing, Halle Holm who at the moment is successfully acting in commixed single combats, can sign the contract with UFC.

In Sherdog.com interview her manager Lennie Freskez, reported that his meeting with UFC management, Lorenzo Fertitta the other day took place, Dana White and Sean Shelby with whom he discussed previously possible signing of the client in UFC.
"Me accepted very warmly – they are very pleasant people", - Freskez told. "They behaved as true professionals. They like Halle, and they suggested us to conclude the agreement with UFC"
"We discussed with them the basic moments of the contract – on what both parties can go, and on what can't. We have some disagreements so to us is over what to work. All of us are very glad that Halle can appear in UFC"
"In case of conclusion of agreement, Halle doesn't become at once the pretender to a champion title. We want to carry out couple of duels before meeting Rhonda Rosie. Such is our plan. Naturally, one of the main aspects of negotiations is its probable fight with Rosie. It is superfight, and potentially, the largest duel in the history of the female commixed single combats. These are big money, and at the conclusion of the contract I want to be convinced that Halle will be rewarded on justice"
On the fourth of April on the Legacy Fighting Championship tournament 30 Halle Holm it is necessary to meet Juliana Verner in a title duel for a champion LFC belt in the easiest weight. It will be the third fight from four which Holm has to carry out according to the agreement in force with Legacy Fighting Championship, however, the contract with the organization isn't exclusive, and doesn't prevent to conclude the agreement with UFC. If the bargain with the largest mma-promotion isn't concluded in the next months, Halle Holm will perform on June 13 at the LFC 32 tournament in Houston, and, thus, will carry out the last duel under the contract with Legacy Fighting Championship. After that Lennie Freskez plans to return to negotiations with UFC.
"If we don't come to the agreement soon, we will concentrate on preparation for the following duel and implementation of the contract with LFC", - Freskez reported. "After that we will continue negotiations with UFC, and we will look, whether we will be able to conclude the bargain"