Roman Gontyuk: "Judo in regions need to lend a shoulder"

Roman Gontyuk: "Judo in regions need to lend a shoulder" 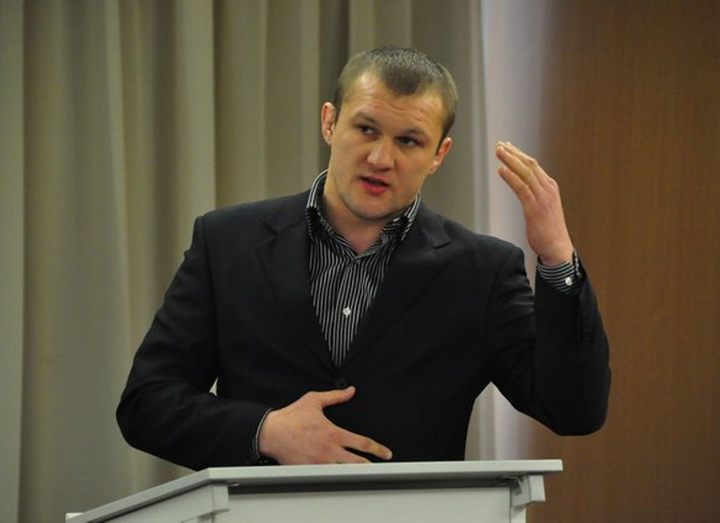 Having failed on the last Olympic Games in London where the Ukrainian judoists for the first time lately remained without awards, in the Ukrainian judo revolution becomes ripe. In particular, the most titled Ukrainian judoist of the present Roman Gontyuk gave the candidate on replacement of vacant post of the head coach of the national team of Ukraine on judo. The correspondent "Galichini Sportivnoi" wished Roman happy birthday which it celebrated on February 2, and also asked on events in the Ukrainian judo, the reasons of promotion of the candidate on a post of the head coach of the national team, undercurrents and problems of development of judo in Ukraine.

- I gave the candidate on replacement of vacant post of the head coach of the national team of Ukraine on judo, - Roman Gontyuk tells. The decision of the commission it was accepted to support my nomination and to recommend me to the Chairman of Civil service of youth and sports to Ravil Safiullin in order that it was possible to sign the contract with me. However next day, Sergey Dubrova, the present head coach, wrote on me the letter supposedly I have a number of violations to hold such position that I have no due education though now I study, there is no length of service though about length of service, I consider, in this case speech shouldn't go, after all in judo I since the childhood and all subtleties of this sport know from within. I know how to prepare athletes for competitions therefore anything heavy thematic in this plan for me isn't present. Therefore at present a question with my candidate still consider. Certainly, in this case I won't lower a hand, I will fight up to the end. After all irrespective of who came to a post of the head coach there has to be one task - to unite all country that wasn't left and right. It isn't necessary to divide the country to the west and the East, shouldn't be so-called "our" and "your", and there has to be, in this case, one idea - judo. This thesis has to be the main task of any head coach of Ukraine. After all there shouldn't be a difference meanwhile, from where this or that athlete. Same concerns also children's judo. No matter the child from the periphery, or from Kiev. Understand that talented children from the periphery have to have the same rights, as well as the Kiev children, or, say, Dnepropetrovsk, Donetsk, from Simferopol or from other large city.

What you will tell about judo development in regions?

- In this question of judo development in regions the perspective exists for a long time. Many people, finish sports career and with pleasure would like to work in this direction, for promoting and judo development. For this purpose they need to lend a shoulder, to give financial support that they could work for themselves at peripheries and lift judo.

- That you will tell as a whole about judo development in Ukraine. There is an advance forward, or, on the contrary, there is a degradation?

- It is possible to say much that today the national team of Ukraine on judo on Olympic Games went to London in full strength. It is possible to say that the Ukrainian judo gathers big turns, but we perfectly understand that today on tournaments which came to the end in Georgia and Sofia with our athletes isn't received a hail of medals. But I will notice that after Olympic Games in London many of leaders of the national team of Ukraine have a rest and none of them didn't take part in the first tournaments which now take place. It is possible, what not all leaders this year will participate and in the forthcoming European championships and the world. That is us Olympic Games interest. About what we speak? That to us is necessary for the license, or what the result on Olympic Games is necessary to us? ! Certainly, it is difficult to me to compare these things. Let's tell, in comparison with receiving the Olympic medals in judo, we took a step back if to take into account that number of the obtained Olympic licenses, that is a step forward. It is difficult to give a definite answer. If to speak about the city of Kiev, in it, of course, there is a good school. Unfortunately, today it is created and such policy in judo if you with us, can go there, there and there is conducted. If you against, - go home and have a rest there. And such shouldn't be, it - is wrong.

- Before the Olympic Games in London in the Ukrainian man's national team on free-style wrestling there was a scandal between the head coach of team Ruslan Savlokhov and skilled wrestler Andrey Stadnik. The last, by the way, didn't get on the Olympic Games-2012. Because of it "wrestlers" had the small split, one part of team supported Stadnik, including the captain of the national team Vasily Fedorishin, another - Savlokhova. Such split in your sport isn't possible, considering those events which now occur in man's judo of Ukraine?

-  I don't want to say that there is a split, it is simple I have the opinion.  When Vitaly Dubrova who is my good companion with whom we are on friendly terms long ago, and to which, I repeatedly expressed the opinion about it, for some reason doesn't perceive it...  Today our thoughts for some reason disperse from it why these people don't see me in the national team of Ukraine as the trainer as the person who can make a lot of good for the Ukrainian judo.  Certainly, I can come and from outside to prompt something.  However, so I don't see myself because I consider that for the Ukrainian judo made much and it would be desirable to transfer the experience to team mate much more fruitfully.

In free-style wrestling I heard about scandal though I consider that it especially their internal moments. Both Andrey Stadnik and Vasily Fedorishin are my good friends therefore, of course, I would support their position in any case, after all the athlete feels all this system on himself. Certainly, it is difficult to bypass such senior trainers who "experienced" and know how to behave. Unfortunately, now your honesty and the principles, the correct moments in these or those questions isn't necessary to much...

- A few days ago in the capital of Georgia of Tbilisi the Continental Cup came to the end. Why you didn't participate in these competitions?

- Now I have a rest. I gave the candidate on a post of the head coach of the national team therefore more now I work in this direction. Also I have a rest and I am restored after a stress of Olympic Games in London.

- Recently you had a Birthday. How it celebrated?

- Birthday celebrated in the family circle. My next companions were invited. And presence of my friends became the main gift for me...

- Among friends, probably, there were also judoists, or representatives of other sports?

- In the majority is there was my family.

- Yes different there were gifts. Someone presented a hunting knife, someone spirits, someone shoes, someone - money.