Vladimir Cheboksarov: About the past and the future wrestling

Vladimir Cheboksarov: About the past and the future wrestling 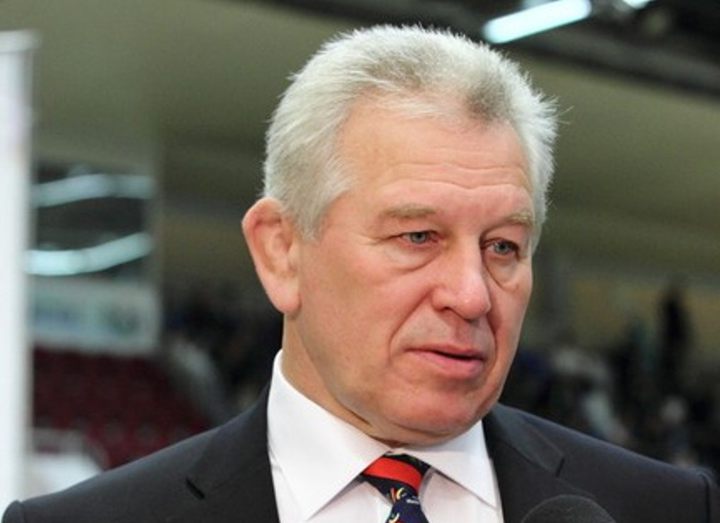 Olympic flame began the travel across Russia. In December it will reach Tyumen where the fakelonosets are already chosen. Among them — Vladimir Cheboksarov.

- Procession with a torch — it, of course, not procession in a column of an Olympic team, but an event too not ordinary. For certain, you expected, what to you will suggest to carry by fire?

- To me the offer from department on sports and youth policy of the Tyumen region arrived. Asked – you will be able? I answered – I will be able! To me entrusted to bear a torch that in general it is explainable: my result was the highest achievement in the history of the Tyumen region on summer sports. Recently it was repeated by Rustam Totrov, having taken in London silver. Movement good though, maybe, to someone frames of torch procession will set the teeth on edge if to show them on TV every day. However in each region where fire will be carried by, there are heroes, fellow countrymen who deserve respect. It is country history, this education of traditions, we in each branch have loud names, people, worthy to become fakelonosets. It is possible to be run with fire, thereby having designated that you have an active living position. The person needs to know that he didn't drop out of a holder. For me the idea of is important also that the fakelonosets is an example for youth. And traditions are put. Children grow, and then take an active living position. It is fine that relay will pass through all territory of Russia.

- For you as the person heading federation, participation in the preolympic marathon of fire is opportunity to draw attention to Greco-Roman wrestling development?

- As Greco-Roman wrestling development in our region is connected and with my name, I was an example for younger generation and tried to correspond. There are still worthy representatives of our sport. Recently Hamidullina's brothers, one – the winner, another – the owner of a medal returned to Tyumen from the World Cup among veterans. The champion title was won also by Andrey Semanov. So the good result says that traditions of Greco-Roman wrestling are strong. Even if people weren't realized once at young age, now, being mature, they show, on what are capable. This manifestation of character and strength of mind. Here an example for younger generation! The more young people will strive for such results, the nation will be more healthy.

- Let's remember your participation in the Olympic Games.

- It was 1976. It was very difficult to be selected in team of the Soviet Union then, especially to me, the athlete from the remote place where there was no serious school of Greco-Roman wrestling, there was no the person who has shown a good result on whom it would be possible to be leveled as on a leader. It was heavy not only me, but also to instructors as trainers also didn't have experience, there was no such authority to put in about the athlete a word and to it would listen. Without weighty baggage we followed shoulders by trial and error. And trainers, and I only tested and thought — how to show result? We aspired to it, and at us it turned out. It was improbably difficult to get to the main structure, there were terrible rivals. In my weight Anatoly Nazarenkoiz Kazakhstana was considered as the first number, now he with a family lives in America. I used the best efforts that me included in an Olympic team. My advantage I played that fact that in me saw the perspective, well trained athlete. At me were on the ball both physical standards, and motivation — by then still never I won on the world scene. Yes, I became the champion of the Soviet Union, I won this title in 1976 that probably and affected the solution of a trainer's staff on inclusion me in an Olympic team. Nazarenko by 1976 had titles of the triple world champion, the silver prize-winner of Olympic Games. But dispute for the permit to Montreal won against youth, enthusiasm and huge desire to take the Olympic medal.

- How prepared for the Olympic Games?

- In 1968 on the Olympic Games some athletes didn't pass adaptation in Mexico City when the team arrived on the competitions. There was not enough time to be restored and acclimatize that, naturally, affected performances. Competitions in Mexico City took place at the height of 2300 m above sea level, and the team in the conditions of the plain trained. When wrestlers got on such height, it became clear that it is necessary to prepare for it specially. Since then complex scientific groups started being created at national teams, in them young and skilled scientists worked. To Montreal experience was already saved up, there went not at random. Athletes brought in eight days, prepared both on the plain, and in mountains, thereby raising possibilities of an organism. We were already adapted for different conditions. And though Montreal is on the plain, maybe, mountain preparation for performance exactly there and it wasn't required, but trainings at height raised our opportunities.

- The feelings before competitions you remember?

- The meeting in CPSU Central Committee was remembered, it took place on the eve of our departure for games. It is known that on July 4 America celebrates the national holiday the Independence Day, then celebrated the 200 anniversary. To us the task – to bypass in team and medal competition a team of the USA at them on the native continent was set. That we also made.

- Tell about decisive fight with the Yugoslav where at a draw of the judge gave a victory mainly to your rival.

- After the third circle at me was two more, but in wrestling with Momir Petkovic and the destiny of a medal was decided. For the Yugoslav cleared away the road, he and became a champion. Then I learned how it everything happened. There are in sports such moments where plays a role subjectivity. Judges were given installation, and those adjusted me, forcing to be mistaken, incorrectly defined activity. I left home with silver, but other our athletes won seven gold medals. The strategy chosen by the Soviet trainer, was successful for team, the result was impressive. An Olympic team on Greco-Roman wrestling became a legend. Well, and that the medal was necessary to Yugoslavs, struck on me, and they took gold. I know that Petkovic had then long time as I to the Olympic Games won against it and after in the World Cup. He understood that I am stronger. I don't blame him that gold appeared at it, instead of at me. He had to sustain and endure it somehow too.

- In February the IOC brought up a question of an exception of wrestling from the program of summer games of 2020, and therefore in FILA the decision to change rules of duels, to replace the management was made. It did good to Greco-Roman wrestling?

- Unfortunately, in 10 years which a post of the president of the International federation of the integrated styles of wrestling were taken by Raphael Martinetti, wrestling took many steps back. Rules which existed in recent years, gave the chance to judges to affect a course of a meeting and to distribute, what medal on what continent will go. Awards were given without the principle "the first among equal". You were perfectly prepared, is ready to take an award, but you emasculate. It not in a sports way. Management change, updating of rules did good to wrestling. Rules constantly have to be improved, keep up to date, to be the dynamic. Former slowed down wrestling development, it was gone from screens of TVs and how then to attract children in section? And still a question – to that to teach them? Or to all complex of wrestling receptions, or several main to receptions which lead to a victory? If to full school — that it to waste time, to work individually. Or after all to be limited to two-three actions to achieve a victory? At the second option wrestling wouldn't be wrestling, and would turn into a crush. This uncertainty conducted to confusion in trainer's ranks. We have many centers where wrestling developed long ago and successfully, now those who didn't approve the rules existing during the stay of Martinetti again will start working.

- State, please, an essence of change of rules.

- If earlier duels lasted three periods for two minutes, and it was necessary to win two periods, now the account will be conducted throughout all wrestling by an accruing result. Duration – two periods for three minutes. Points for pushing out are cancelled. Short fights didn't give the chance to the athlete to be realized completely, he couldn't risk, carry out receptions, and it means wrestling became uninteresting. At longer round it is possible to take the risk as there is time to recoup in case of unsuccessful reception. All this influences staginess. Now wrestlers have to aspire to a flawless victory, carry out receptions. It is possible to finish wrestling in seconds, for example, as Nikolay Balboshin on the Olympic Games when he for a short time won against rivals. If you are technically ready, such wrestling looks beautifully.

- How the Tyumen school of Greco-Roman wrestling looks against Russia?

- Recently there took place a sports contest of school students where our children took the fifth command place among all regions of Russia. Is at us and the winner. If I was 44 years ago the second on a sports contest, now the resident of Tyumen became the first. In junior, youth and adult national teams children of the Tyumen region are presented. Certainly, year for a year isn't necessary. But if one year of our representative isn't present in country team, on following it surely gets. In wrestling so — if you gathered a form, you will be in a holder, only standard it is necessary to support constantly. We have now leader Rustam Totrov, Volodya Ilnitskomu needs to rush into the national team, there is a number of athletes who are knocked on a team of Russia. Structure at us very strong. Certainly, all don't become champions, but we will be we hope that the real talents under the leadership of wise trainers will reach top. It is very difficult road, and all can overcome it only together.