In Penza the Tatar wrestlers took under a roof

In Penza the Tatar wrestlers took under a roof 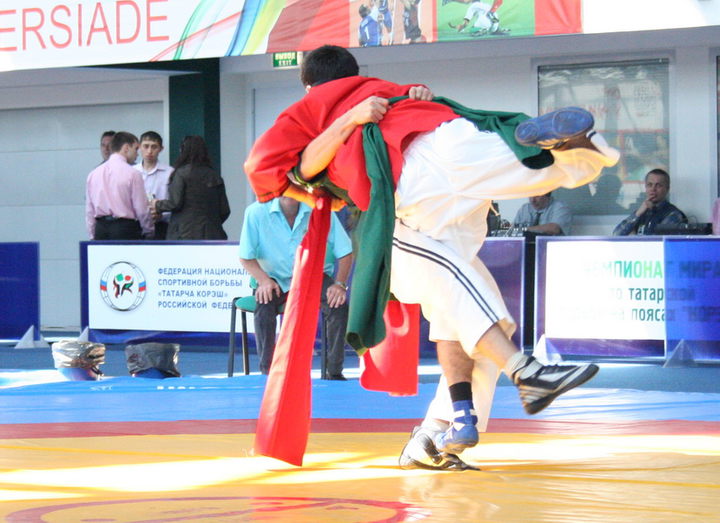 Koresh summed up the results at professional sports level

On the basis of the sports Olympic complex in Penza for the first time passed open championship of area in national wrestling on belts "Tatarcha Koresh".  But if earlier such competitions were the integral attributes of Drinking bouts and other national holidays, this time the koresh was carried out in the closed hall.

As the organizer of colourful action with support of the ministry of youth affairs, sports and tourism of the Republic of Tatarstan, Committee on physical culture and sport at the government of the Penza region, the Tatar autonomy of the Penza region, the regional Federation on national Koresh wrestling on belts (chairman Zyakizhan Kuryaev) acted. In competitions 70 athletes took part in ten weight categories (from 50 kilograms and above), representing teams of four subjects of the Russian Federation

At a ceremonial opening of superiority the congratulation from the chairman of executive committee of the world Congress of Tatars (WCT) Rinat Zakirov was read to organizers and participants of competitions:

– Pleases that, – he noted, – that similar competitions are carried out not only among representatives of the senior generation, but also among boys and young men – our future people. We hope that the youth of the Penza earth will show the skill. We wish to all participants to show good wrestling and to carry out competitions at high level.

The koresh as a sport was always developed at the Turkic people, and has thousand-year history.

– It not simply wrestling on belts, - the vice-chairman of executive committee of the Tatar autonomy of the Penza region Zyakizhan Kuryaev, – but also noted in the performance an important element of national culture, along with customs, ceremonies and traditions, a numerous family of the Turkic people. We want to keep these traditions. Especially since 2013 wrestling is included in the official list of sports and today the koresh endures new revival.

By the way, his many pupils from places of compact accommodation of the Penza Tatars, become winners of the Russian and international championships, showed professional possession of methods of wrestling and the uncontrollable will to win. Audience received from wrestling by the ancient and carefully kept rules huge pleasure.

As well as on all national holidays on superiority the Tatar entertainment – chak-chak enjoyed special popularity.  Well and incendiary dances and melodious songs performed by the Tatar girls only added mood to guests and participants of competitions.  By the special order of the Tatar autonomy of the Penza region to this event branded undershirts with action attributes were sewed for participants.  All wrestlers received memorable valuable presents, diplomas and letters of thanks.