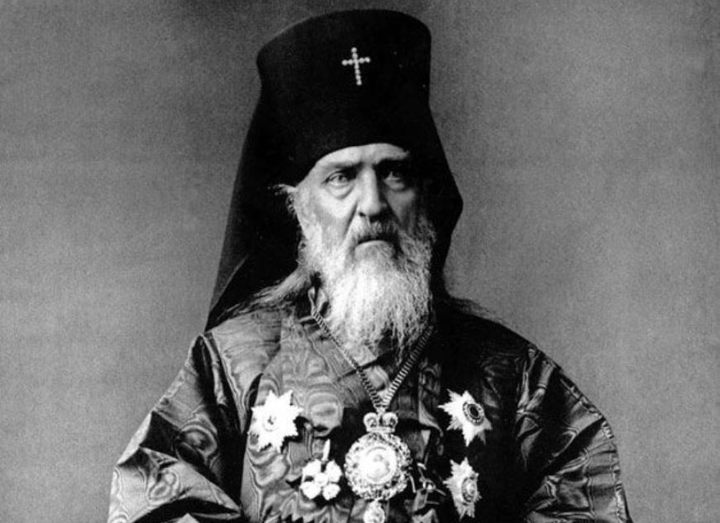 The Russian Orthodox mission starts acting on a turn of 19 and 20 centuries in Japan. Celibate priest Nikolay (Kasatkin), in the world Ivan Dmitriyevich Kasatkin becomes her head and the spiritual head, was born on August 1, 1836 in the village to the Birch, the Smolensk province.

Having excellent ended the Smolensk Theological seminary, in 1857 it was admitted to the St. Petersburg Spiritual Academy.  Before the termination of Academy in it Bozhiye's calling – to preach Orthodox belief in Japan was found.  Having submitted the corresponding application, on June 24, 1860 Ivan Dmitriyevich Kasatkin was cut in a monkhood with a name Nikolay.  In July of the same year celibate priest Nikolay leaves to the place of the service to the city of Hakodate.

Having arrived to Japan, it faces a huge problem:  Japanese don't accept all alien, and sometimes perceive opposite to their culture even with aggression.  The true-life story of Pavel Savab, the first Japanese turned into Orthodoxy and the God son of Prelate Nikolay can be a striking example.

Its real name – Yamamoto Kodzuma.  In 1857 Yamamoto was compelled to run to the city of Hakodate as it was accused of theft and was searched by police.  In Hakodate Yamamoto married the daughter of the Shintoistic priest to whom became the adopted son and replaced a name on Takuma Savab.  Then, having joined the movement which has read the emperor, Savab headed the group demanding exclusion from Japan all foreigners.  For implementation of this purpose it was decided to kill employees of the Russian consulate in Hakodate.  Once at night 1865 Takuma Savab armed with a sword, met celibate priest Nikolay, intending to kill him before that will start preaching.  Father Nikolay asked it why Savab wants to kill him, without having heard about the doctrine which it preaches?  Then Takuma Savab agreed to listen to father Nikolay about Orthodoxy and words of the young missionary touched his heart.  He became interested heard, and from that day started studying the Christian doctrine.

At that time in Japan were widespread, as well as now a sintoizm and the Buddhism.  Japan torn apart by internal wars is a lot of centuries, trained masters of martial arts on the code of honor described in "Bubisi" – the well-known treatise about war art.  Honor of the soldier shouldn't be soiled by a shame and was approved in any ways, up to ritual suicide.

Martial arts were taught in educational institutions. Actively the traditional kendo, to a dzyu-dzyuets developed. Dzigoro Kano's diligence popularized judo, there was a karate. Prelate Nikolay understood that it is necessary to study and understand life, a life and needs of Japanese and only then to start preaching about the Christ. Pavel Savebe began to help Svt.Nikolay in knowledge of culture of behavior of the Japanese people. Nikolay went in Japanese dodze, studying etiquette, learning culture of Japan as considered that martial arts it not only ability to fight, but also a certain cultural heritage is hot them favourite Japan.

The surprising fact is that in a Japanese theological seminary of that time there were teachers of judo.  It was very prestigious to study in seminary.  Many ministers of Japan came to the Prelate with a request for acceptance of their children to educational institution.

In one of educational institutions of the Russian Orthodox mission, seminary in the city of Kyoto, Vasya Oshchepkov who has become the ancestor of domestic judo and one of founders of fight of sambo got fourteen-year-old the orphan.

After defeat of Russia in Russian-Japanese war of 1905 the Southern Sakhalin was sawn-off from Russia, and young Vasily Oshchepkov involuntarily became the citizen of the Country of a rising sun.  Mother Oshchepkova died when the son was 11 years old.  Fortunately, father Nikolay, the Archbishop took part in destiny of the boy Japanese.

Once a year in seminary selection of the best pupils for training at Kodokan's well-known institute was made.  On October 29, 1911 Oshchepkov was admitted to this educational institution.  In Kodokan's archives there is the corresponding record about it.  Vasily moved in Tokyo where on June 15, 1913 Oshchepkov received the first masterful degree and soon passed examinations for the second.  Vasily Oshchepkov became the first Russian, deserved degree of the master on "Kodokan's" judo.

Today many connect martial arts of Japan only about a zen Buddhism, but I consider it not absolutely correctly.  Considering the biography of Prelate Nikolay and Vasily Oshchepkov's biography, we see that martial arts had no religious soil or background and if such was, Archbishop Nikolay never, wouldn't allow it in a theological seminary.

In all that we see it is possible to look for bad or good.  Karate, judo, sambo or other fighting single combats in essence is ways of maintaining a duel with the opponent.  And they can't be connected with spiritual practice.  Fighting single combats arose as a security measure, instead of attacks and got a certain coloring in a place of the birth and primary development.  Essence in them same – protection of the house, the Fatherland.

The history of our Homeland shows a set of examples of sanctity of a fighting Way of the person. The bright can be brought a little: shimonachs Trinity Lavra of St. Sergius of Peresvet and Oslyabya which were heroically lost on Kulikovo field, Prince Alexander Nevsky, Princes Boris and Gleb, admiral Feodor Ushakov and others. They went on the way of the soldier, protecting the Fatherland, applying martial art which seized.

Perhaps, I will surprise someone or I will upset, but the Orthodox sermon easier is perceived by souls of the people going on a fighting Way, gets into heart to stable and successful young people more difficultly.  Not that we remember a secret God when to us it is very bad or there was a misfortune.  And it isn't surprising that the people who are engaged in fighting single combats, are always ready to accept spiritual knowledge.  Therefore they also go on the way which learns their nezlobiya.

One of rules of oriental martial arts is modesty, lack of aggression, ability to constrain the temper.  Some masters of an antiquity took to themselves in pupils of only kind, quiet and sympathetic people.  The way of martial art goes with the person all his conscious life and if it never in life applies the knowledge against the conscience, so it passed completely the Way and reached in it perfection.  Not the victory over the enemy is the main thing in this Way, and a victory over the passions and by itself.

Drawing a conclusion from everything that is told, it is possible to express thought:  not occupations by martial arts are born in itself by a negative charge, and the person who is incorrectly using the knowledge.  In itself fighting single combat isn't paganism, but only a way of physical and moral self-improvement.  The person is stronger, the more modestly he has to be.  Words of the well-known master, the founder karate to Godzyu-ryu Tedzuna Miyagi can become confirmation of it:  "If you became ten times stronger, don't show it, and show that five times only.  The Skoromnost paints the person".

Wants to finish this article a reminder that in Japan Archbishop Nikolay (Kasatkin) during lifetime read not only Orthodox Christians, but also pagans. After the emperor there was in Japan no person who would be respected the same respect, such popularity as head of the Russian Spiritual Mission. All life and all efforts of this self-sacrificing missionary were directed to the sermon of the Sacred Gospel and light of the Word God's in the Rising sun Country. Its works equal to the apostles bore a rich fruit.

Prelate Nikolay became the only European to whom on a grave the wreath from the Emperor of Japan was sent.  It became the highest honor which neither to, nor after It any person didn't receive.  Nikolay (Kasatkin) equal to the apostles, the founder and the primate of Japanese church, is the outstanding Russian missionary of the 20th eyelid.  Having rested in 1912, in sixty years after the death, on March 31, 1970 it was canonized.

Nikolay-to – so in Japan still call the Prelate.