The Russian stars of judo visited the USA

The Russian stars of judo visited the USA 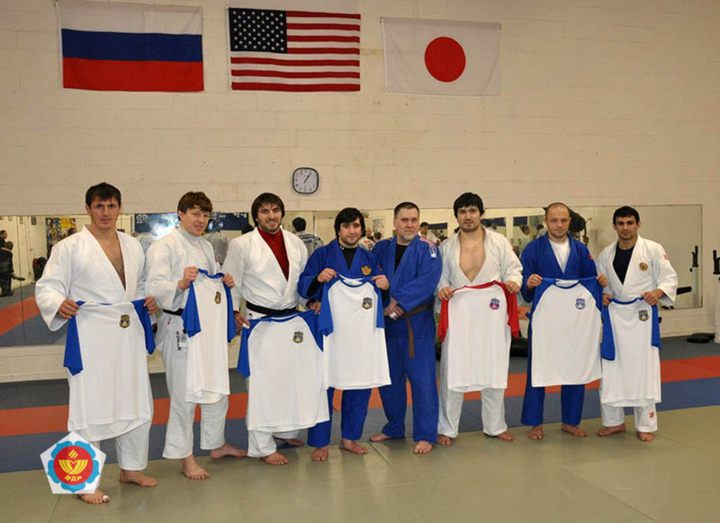 The whole month was spent in the United States by the Russian judoists - medallists of the Olympic Games-2012: Tagir Haybulayev, Mansur Isayev, Arsene Galstyan and Ivan Nifontov, and also Alim Gadanov, Camille Magomedov and Hasambi Taov.

About one of such trainings told in a plot on the canal NTV America, well and me it was succeeded to communicate to one of the young American athletes, visited a master class in New York. But about everything one after another.

"For a meeting with champions in New York prepared in advance, - correspondent Julia Raydler tells, - Expectation and huge jams on streets couldn't sadden so important event. The amicable team of the Russian stars of judo from the strongest national team in the world travels across America. They made furor on Games in London, having bypassed favourites in this sport – Japanese. Three gold, silver and bronze - for all history of the Soviet and Russian sports of such success any team" didn't achieve.

To become the strongest the huge desire and a lot of work to carry out" is necessary, – Mansur Isayev speaks. Huge work carried out not only athletes, but also the trainer of the national team Ezio Gamba. Under its management the Russian man's national team managed to achieve in three years of the status of the strongest in the world.

"Ezio - "responsible" of all our victories, – is told by Tagir Haybulayev. – To find the good instructor in life is a great luck". Ezio also gave team the name "DreamTeam" - dream team. As Gamba when you work with such children admits, dreams come true. I agree with Tagir and Hasambi Taov: "Of Ezio's our team I made a family. And this family yielded result".

It is happy with opportunity to receive in a hall of the Russian stars and Clyde Uorsen, the head coach of school of judo of "TechJudo": "Our children have to have heroes and opportunity to imitate them. My son is 16 years old and he is happy to be overcome on one tatami with Olympic champions, stars of the first magnitude".

Christopher Skelli, the judo manager of the national team of the USA on the Olympic Games-2012: "Unfortunately, judo isn't so popular in America, as in Russia. At us today fine opportunity to see fine judo performed by Olympic champions. We are very grateful for that they impart experience with us".

Forecasts of athletes are optimistical. Ivan Nifontov told with humour: "It seems to me that if Americans will fall in love with our look, they will be able to capture this fever of judo the whole world!"

The formula of success of Olympic champions is invariable. "In sports, as well as in life the principle one: you want to achieve the objective – it is necessary to work, work without cease! " - Arsene Galstyan sounds it.

Children excellent showed the Olympic spirit, discipline and at them is to that to learn not only to athletes. After all lives, as well as in sports, force, and spirit" wins not - the American TV reporter so finished the plot.

And here impressions of one of participants of a master class in New York Arthur Lanchinskas, the member of the junior national team of the USA: "Your children such good fellows! There passed week after that meeting, and I still am under impression! They so love that they do that it is felt by all around! They are big professionals, Masters from capital letter! All of us were struck as far as these acting judoists of the highest class are ready to share skill with surrounding admirers of judo! To share, instead of it is simple to show well-known equipment. I asked Mansur Isayev to look and correct my "pickup". And Mansur patiently stood, looked, then explained, itself showed and corrected while at me it didn't turn out as it is necessary!  What to speak – the master! Alim Gadanov also corrected my throw through a back from knees, Tagir showed work subtleties in orchestra seats. All of them are such good fellows! Very benevolent, sociable, and not so star! All of us took great pleasure from this meeting. Your athletes - pride of the country! It is sure, rounds of such stars of sports can lift and lift prestige of Russia! In a hall where all looked at them with open mouths and they caught each their movement, Olympic champions, world champions, quite could assume airs, but put nothing itself above even ten-year-old children who judo only started being engaged. They were simple "children from the next yard". To all treated with big respect. We very well talked to Kamil, to Tagir, to Alim and Mansur. When I struggled with Ivan Nifontov it was so accurate as if I can break when falling into slices! (laughs) All children willingly went on contact.

In a hall was not a lot of Russian-speaking, but your children without special problems communicated in English, didn't hesitate, tried to understand at all that from them want and in a huge number distributed autographs. To them the whole turn was built! Today they - the strongest team of the world and it know everything. And me to admit, too I seized pride of Russia and of them".

After return from the USA our Olympic medallists will go to Russia tour. In Kazan, Samara, Krasnodar and Makhachkala in March the glorified judoists will give master classes.