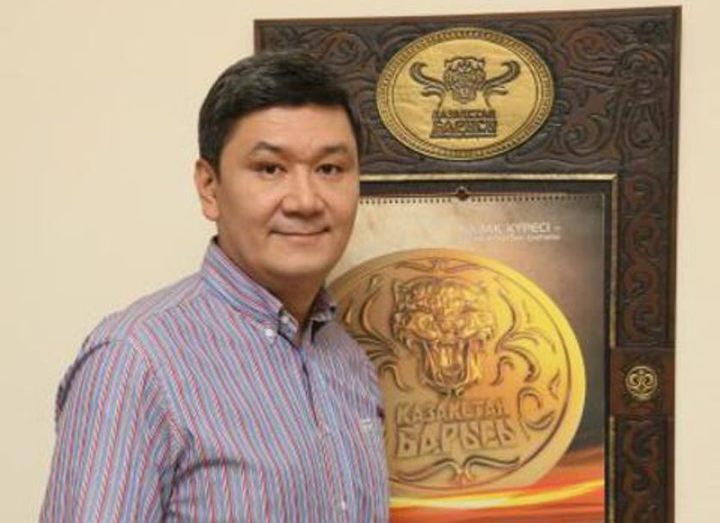 Ideas visit many, but only units manage to embody not simply it in reality, but also to achieve national recognition. That was the most difficult in realization of own idea and what changes wait tournament, Armand Shurayev - the main ideological inspirer of tournament told.

Armanshurayev, the Chairman of the Board of trustees of Fund on developments the kazak kuresi "Kazakhstan Barysy", the director general of KTK TV channel

- Armand Tulegenovich how main "parent" of tournament, whether you expected, what "Kazakhstan Barysy" will reach such level?

- Certainly, I expected, at least, hoped for it. Actually I was sure, чтомы we won't be able to be beyond the next sports competitions, having turned it into show with staging elements. Therefore, I think, we from the very beginning took the correct reference point and made the sports dramatized show, and vety, of course, I and see the key to success. I can tell, as last year at us passed tournament in level. But this year, of course, thanks to that support which to us was given by the general sponsor of "Samruk-Kazyna" and other our sponsors, we could surpass last year's level in times.

- What personally for you represents этотпроект?

- I can tell that is very proud of that, чтосмог to realize it. You understand that there is a lot of ideas, and "idea" it is good, but most often it and remains on paper. I am proud of that it was succeeded to realize this project. And now it is Idea which support, hundreds thousands Kazakhstan citizens look and come.

- It differs that is a unique holiday and it is impossible to call it only sports, I consider that there are a lot of elements uniting. We look for decades national projects which would unite, rallied the people, here "Kazakhstan Barysy" one of such ideas which became "driver" in order that the number of patriots of our country increased. It is the international project and it was noticeable on the tournament, especially, for example when Maxim Gerber from the Kostanay region acted. It was "supported" by inhabitants from other regions, in spite of the fact that it not from among the title nation. It certainly the project which unites all Kazakhstan citizens.

- You say that many ideas remain them. What for you was the most difficult in implementation of the project?

- The most difficult was to find adherents, certainly. Many didn't trust in project life because on that the moment wasn't similar. And now you see that only, probably, Opening ceremony of Aziada can be compared by number of the audience in a hall to the project "Kazakhstan Barysy".To me it was necessary to overcome mistrust who tested both last year's sponsors, and present. You saw, probably, that tournament was visited by the first heads of all companies who acted as sponsors. They were from beginning to end, and we already now got them support the next year. To  the project trust. It is cool!

- Whether you consider "Kazakhstan Barysy" as the national project?

- Certainly, it first of all and national. Any idea which doesn't support the people of Kazakhstan is a failure. We and initially positioned it as "the social elevator" for rural youth. And we managed to make it. All participants of tournament – natives of small auls. These are those people who thanks to the not in dozen to force, work and persistence achieved what they achieved, and they can go with is proud of the raised head because them recognize, both recognize, and respect, and not only in their areas. Them know and them support in all republic. It was visible and on tournament because to Astana there arrived many guests from all corners of the country to be ill for the national batyr. Moreover, tournament was visited only in the history of Kazakhstan by double Olympic champion Ilya Ilyin and it means that also Olympians recognize that ours палуаны on the status don't concede even of.

- I think that will be because if to imperial tournament in Japan on sumo already two thousand years, we only hold the second year our tournament. Some said that here Kazakhs never fought in jackets, fought barefoot. It is a lot of any moments. And, considering all wishes of fans and participants, we plan to hold big scientific and practical conference, having brought together athletes, trainers, historians, scientists, ethnographers to accept all together any innovations and somehow to improve tournament. I think, our already available tradition when athletes leave with a skin organically fitted in and the winner carries away it in the form of a military trophy. We will expand this tradition further. The bronze medallion was sewn to each skin with a name and a surname of the fighter. And some years later each of them will be able to remember whom and when it won will transfer a skin to the following generation as a family relic. Here already also there is a history of our tournament.

- I think, It should be noted in our conversation and those who lives this project, also as well as you. Tell us a little about team which "does" the project?

- In the first very much I would like to thank sponsors who for two years help with implementation of the project. It would be desirable to mark out people who do everything for this project is Sadyk Mustafayev, the fighter in the past, a rukovoditelyupravleniye of tourism, physical культурыи sports of Kyzylordinsky area. Madiyar Aldongarov – the Honourable President of our fund thanks to whom the first tournament took place. Sarsen Kurmanbek too has wide sports and organizational experience. And, certainly, that it joined in our team yielded the results. In addition it would be desirable to thank the Moscow crew on television translation which work at competitions which are broadcast on the most rating sports channels. Thanks to them all Kazakhstan citizens could watch on two channels tournament – KTK and "Kazakhstan". TV broadcasts "Kazakhstan Barysy" were at the level of any competition of the world scale. I am very grateful to FNB "Samruk-Kazyna" and personally to Aydar Makhmetov who - in the past the fighter, the deserved master of sports - was very seriously connected and I brought a lot of creative. "Astana-Motors" to Erlan Smagulova's vlitsa as it became clear, by the way, in the past too the fighter (laughs – with a comment of the author), I allocated three cars for rewarding. And "Kazaktelekom" – in the person of Kuanyshbek Esekeev, too, as it became clear, in the past of the wrestler. I can tell that we not simply had sponsors, and people who too have the "wrestling history". Over the project the huge team worked, there was a wish to thank both tourism and sports Agency in the person of Talgat Ermegiyaev, and a municipal government of tourism, physical culture and sport of Astana in the person of Aytalap Kurgambayevai his teams. Federation kazak kuresi which helped us with judges, and Serik Tukeev-Prezidentof Federation is accepted direct take part the tournament organizations. It is pleasant that the circle of our friends of colleagues, adherents grows from the project to the project. Many people helped with realization, including volunteers who came and offered the help. We already form traditions of the western countries which attract volunteers for implementation of large-scale projects, the same, for example, Olympic Games in which a large number of such volunteer assistants participated. And we develop have same traditions though somehow involved in events within the country.

- Armand Tulegenovich, you most don't have that personal "wrestling history"? In what sport you were engaged or can be you are engaged?

- I was engaged in Greco-Roman wrestling (laughs).no, unfortunately, not long as was traumatized which didn't allow me to continue career of the athlete and still reminds осебе. But it in any case left a big print in my life, in my character and human qualities. I think, even for тригода to me it was succeeded to cultivate in myself "combative" qualities which and help me with life.

- Thank you for conversation!