Anastasia Borisenko: 8 of March I will be at work

Anastasia Borisenko: 8 of March I will be at work 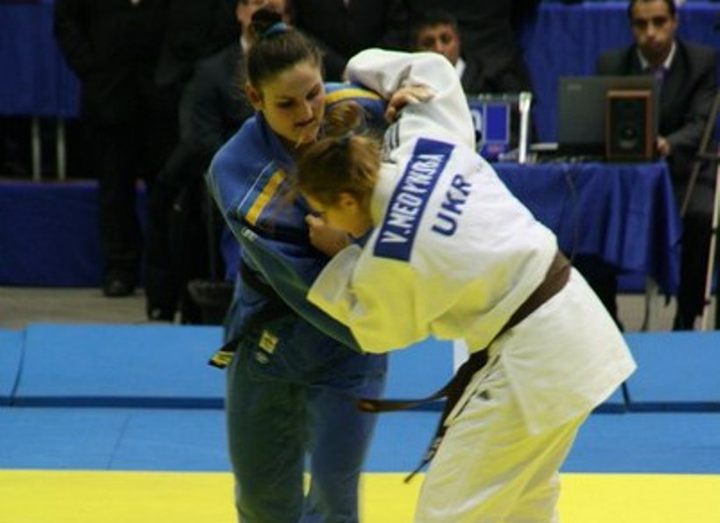 As we already reported, the national team of the Zaporozhye area which has surely taken in an all-team competition the fourth place successfully made a speech at the championship of Ukraine among cadets of U18

- Nastya, occurs opinion that wrestling not women this stuff … What do you think of it?

- My opinion – the person can choose any kind of sports, irrespective of – female it or man's. I came to judo casually. My first trainer Victor Nikolaevich Zotov arrived to our school to Yurkovk's village, the Orekhovsky area, having simply declared a set in section. Wishing was a little – I and my big brother, Vladik. Together went on occupations, to the neighboring village of Kirov where began to be engaged.

- No, it was occupied year and threw – there was no big desire and time, and I remained.

- Parents as treated your hobby especially as on trainings it was necessary to go to other village.

- From Yurkovka to Kirov four and the father brought-took away only four kilometers. As I wanted – and was!

- At once everything began to turn out?

- No, certainly. It began to turn out only over time. With me five more girls were engaged, they were more senior than me, for three-four years, promised, but further already aren't engaged though, apparently, someone rose to level of the candidate for the master of sports.

- The first medal you remember?

- Yes, it was superiority of area, in Orekhov. I took the third place. Struggled with the senior girls, one fight I won also two I lost. When moved to Zaporozhye, clearly, level became absolutely another, much more seriously. Began to leave to other cities, competitors are more feasible.

- It is possible to win not always. How you treat defeats?

Things do happen. Certainly I am upset. There is a wish better, I train, try.

- When understood that the simple hobby developed into professional interest?

- Somewhere in two years after the beginning of occupations when to me suggested to move to Zaporozhye, to a sport boarding school. I then studied in the seventh grade. Four years I here.

- Yes, it was frightening. After all I lived before with parents, and here! First there were hysterics, knew home. Somewhere half a year very much I missed behind the house. And then it was involved, раззнакомилась with all – everything became good.

- At your look, such sections, in villages, settlements have to be?

- Surely! In villages children, in my opinion, more train better, seeking to reach tops. Certainly, in the city of a condition it is much better, but, I consider, it is necessary to do so that and in villages there were good conditions for trainings. It is interesting to children!

- How many now children is engaged at your first trainer in Kirov?

- It is a little. There absolutely small hall at school, is no place to be engaged, in fact. Because there are no conditions – goes on trainings very little. I think if there would be conditions – wishing to be engaged would be much more. After all judo – an interesting and popular sport.

- In respect of occupations at school it is difficult to combine trainings with study?

- Teachers understand that sports at us on the first place and help, somewhere even overestimating estimates. So to study here it is easier. Us, judoists, in a boarding school only eight! We live in two rooms, on three and five people. Everything is good, we don't complain. Daily we train, in the morning and in the evening. Already got used!

- Only in the evening, after trainings. I learn lessons. Time to walk isn't present so we don't visit any clubs!

- Now you study in the 10th class. In a year the school is graduated. What's next?

- I think further to go on the sports line. I want to arrive on physical education faculty.

- Your victory in the championship of Ukraine among cadets became a pleasant surprise. How there took place tournament fight?

- In total there were four fights - first two I won "вазари" and deduction, a third won "юко" – fought until the end of a meeting, and in the ending again threw the competitor on "вазари" and carried out deduction. With all it was heavy, all of about one level.

- What competitions wait for you soon?

- On March 8 there will be a qualifying tournament in Croatia on the European championship among cadets. I will try to act successfully.

- Houses, in Yurkovka, often you happen?

- As soon as release the trainer – I a meteor on a minibus and home! Here nearby, to go only 40 minutes. Parents miss, but already reconciled.

- Once came, looked. I tried to show all the best, especially to mother. You look how I am able.

- I will be, it is possible to tell, at work! We leave together with Maria Skoroy on March 5, and 8 - го at us day of arrival. Let's try to act successfully!